There is one day a year that means more to me than any other – more than Christmas and more than the day of my birth.  It is the Winter Solstice. 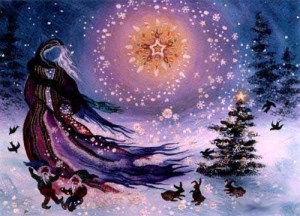 When I was a child my mother took us to annual Winter Solstice parties held out in a field framed with big old maple trees.  The men spent hours bringing in brush to fuel the fire so that it burned long after midnight.  I recall looking at the pile of branches thinking it must be 20 feet tall – it was certainly the biggest fire I had ever seen.  In the bone-chilling cold, my feet bundled in thick boots, and face pressed down into the neck of my winter coat, I would stand by the giant blazing bonfire soaking up the heat and looking out across the snow-covered field at the shadows of trees cast by the moon.  I was captivated by the flames, the shadows on the snow, the millions of stars shining brightly above me, and the silence all around. It was magical and I was energized by this feeling that I felt as Solstice.  I didn’t really understand what it meant at all but I knew we were celebrating something special.

Listening to the crackle of the fire, watching the smoke rise up toward the moon, I was unable to understand the effect sunlight had on my life.  When I moved to the west at age 19 I first became aware of this strange phenomenon called Seasonal Affective Disorder and that it greatly affected me.  I realized that the gray skies and sagging clouds of northeastern Vermont had made me the most depressed person on the earth and knew that I could never go back to that mentality again. Beneath clear blue skies and blazing sun that streaked my hair and turned my pale skin a beautiful bronze, I was a changed person.  I had energy like I had never known before; I felt free and wild and wonderful!  Now this was life! 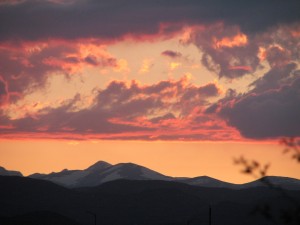 Each year for as long as I can remember, I have longed for this December day to come.  I start crossing off days on the calendar as it draws near.  I keep a mental note of the time the sun falls behind the mountains each day. I start to play a game where I guess how many minutes of daylight will be added by the first of the year.  I watch and wait for this most important day to come from which all successive days will become increasingly filled with light in which I will bask and play.

On the night of the Winter Solstice I am eternally grateful that I have made it through the dark period which has shadowed my world for awhile.  On the other side of this night is the amazing phenomena of light which gives me warmth, new hope, and the return of complete happiness.