Once A Migrant, Always A Migrant?

Sometime around the age of eight, I opened a National Geographic magazine and stared in awe at thousands of pink birds standing on the shore of a river somewhere out there in the big world. From that day forward, one of the main goals in my life was to witness, in person, massive amounts of animals all in one place.  A second goal was born from that goal in order to be able to achieve success at lofty goal number one – I needed to be a traveler. 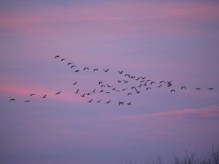 Sandhill Cranes lift off in southern Colorado en route to the their summer grounds in the Northern U.S. March 2005.

Migration absolutely fascinates me!  As I have made my own personal migration from the east to west coast, I have experienced migration in many forms and have become increasingly intrigued by it.  I am interested in both human and other animal migrations. Fortunately, I chose a line of work that allows me to migrate, and to often get up close and personal with four-legged and winged animals who actively participate in this event.  Being involved in bird studies has helped me learn more about local migrations of birds who may travel annually from the mountains to the foothills in Colorado, as well as those who travel far into Argentina from the Colorado Rockies.  In college I learned about grasshopper migration whose physical evidence from thousands of years ago can be found in Grasshopper Glacier in southwestern Montana.  Through my work in Yellowstone National Park, I learned about the local migrations of elk, bison and deer.  In teaching history of the west, I came to know about the great buffalo migration across the Great Plains prior to the mass slaughter that caused near extinction of the buffalo in the west. In addition, I added to my migration checklist, current tarantula and butterfly migrations which are equally as exciting as wildebeest migrations in Africa. 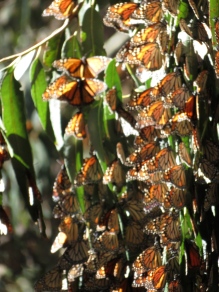 Why do we migrate, both humans and our animal relatives? Research shows that this is an act to find the best environment possible for success (also known as survival of the species or common sense).   The goal is to find the perfect spot in which all of the resources available to me are best suited for a healthy, successful life. Wild animals also have an instinct, called migratory restlessness, that may drive them to pick up and move to another location at a certain time of year.

Recent events in my life have led me to think more about migration and what that means to me.  In the past few years I have joked that I have migratory restlessness, although my desire to pick up and go has never been based on the seasons.  Every day I wake up with the urge to move to a new location and I fight the internal urge to go wander all of the time.  I’m not sure that I understand this instinct to keep moving but I don’t ever want it to leave me.  My restlessness has led me through a life full of wonder and into experiences too good to imagine. I can’t imagine being any other way and I am grateful that a photo in a magazine awakened this in me.

(This blog is dedicated to Todd Reeves.)

Posted by The Outside Within on March 27, 2012 in Uncategorized

One response to “Once A Migrant, Always A Migrant?”