Ok, fine, I admit it.  I have an obsession with trees.

Allow me to explain. 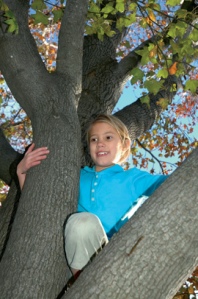 As a kid I climbed trees — all the way to the top.  Take the flexible branched tamarack in the woods behind our house that I could climb easily right up to the very top where there were no branches left.  I could almost perch up there like a bird.  One little breeze and I would sway back and forth with the tree.  I was never scared because I trusted the tree would hold me.  It would bend and flex but I never once snapped a branch, no matter how skinny it was.  I had the most incredible view from up there!  I could see things all around and below me that could not be seen from my normal position on the ground.  It was a fun and exciting way to expand my view!

As a teenager I discovered trees were calming and solid.   Like a log being chopped into kindling for the fire sending splinters out in all directions, my family was splitting apart.  Long walks among the trees of the northeastern forest were my escape from the pain and suffering I felt.  I walked among them, swung on their branches, felt their bark and their leaves.  It was during this time that I connected with them because they were dependable.  I grew to appreciate their reliability and consistency.  I learned that the trees didn’t change much with the exception of with the seasons, but those changes were consistent from year to year and I always knew what to expect as each season rolled around.

In college I learned how to identify trees.  This allowed me to appreciate their differences even more as I now saw characteristics I had overlooked before.  I learned about things that influence their growth and threatened their survival.  I learned about the animals and plants that depended on them and saw them as being one small part of a bigger system.  It was at this time that I learned that I too am a small part of something bigger, connected to so many things that it is sometimes overwhelming to think about.

Today I appreciate trees and what they have done for me more than ever.  There are forests a short drive away that are easily accessible and I often retreat there at times when people and the chaos of life become too much.  Friends laugh at me because I touch almost every tree on a hike and they do not understand why I do such a silly thing.  To me this has deep meaning.  This is my way of reconnecting.  It is my way of  getting outside of myself and being a part of the bigger picture, putting my life back into perspective.  Touching trees may just be the most important thing that I do.

What do you connect with in nature?  Is there a living or non-living thing that you gravitate to?  Why?

The further I am from nature, the less I know and feel like myself.